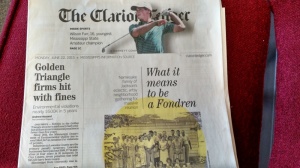 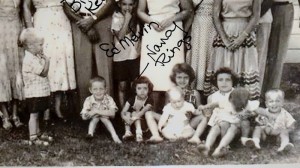 I had a nice talk with a parent yesterday.  She feels that her young children may need “more” than what she can do at home, they may need to be with other children and get the “social skills thing” expanded a bit. She thought they might benefit from learning to trust other adults.  She could use a bit of a break.  She feels guilty about that.  And childcare is expensive…

Above is a picture of part of my husband, John’s family on the front page of the newspaper in Jackson, Mississippi in around 1955.  He is the cutie sitting down on the far left.  This is a typical Sunday lunch!  This is how he grew up, in this pack of loving adults and cousins.  Of course, they were not always loving.  There were some smacked bottoms in those days; it was the 50s, after all!  But mostly accepted, listened to, taught, shared.

John’s mom had this pack of nice grownups with ownership for these kids.  The kids had several houses to run to, lots of folks with whom to walk downtown to the grocery store, bank, 5 and Dime, drug store with soda shop, and school.  Lots of grownups to correct you when you screwed up, and to notice when you didn’t.  A community of kids from whom to learn “social skills”, like not to pick your nose, and not to punch your big sister, who is stronger than you.

Without all of this, it is nice to have “school”.  It is nice to extend your pack of grownups and kids.

I’m thankful that Hillary Clinton made her “it takes a village” speech, because we had forgotten that many of us had a village, growing up, and that it helped, a lot.

Here’s to your village.

I was just in the middle of a tiny, harmless rumor, made of assumptions and tidbits of information.  No harm, no foul, but a reminder of bigger, more harmful rumors.

Well, I have been known to love me some juicy gossip.  Harmless fun, like reading trashy fiction, right?

Years ago, I worked for a church.  One of my jobs was to oversee the nursery program.  This was in the early 90s, when we weren’t really sure how AIDS or HIV were transmitted, and there was no known treatment at all.  We knew who was most at risk, but perhaps we were ALL at risk. (Ignorance is a great feeding ground for rumors.)

The Mother church offered training about protecting yourself from blood borne pathogens.  Standard issue training, right?  No, that was the first time we had heard that phrase, the first box of latex gloves I had ever bought. When I came back from the training, I bought some gloves for the nursery and told the workers to use them when changing diapers or dealing with a boo boo, for their protection, and for the protection of the children.  Back then, we all would argue: “But I am fine…”, and then remember, the children…  The parents would argue: “But my child is fine…” and then remember, us.  So the gloves made everyone look at everyone else: “Is there something up with you?”

Sure enough, the gloves triggered a rumor.  There must be a child in the nursery with AIDS.  Then, the rumor went on to decide which child it was. The rumor told everyone with young children who had AIDS in the nursery.  Surprise!  No one was being dropped off for nursery!

You know the next part: someone said something to the mother of the child who did not have AIDS.  The assumptions were clear to everyone: that child that you don’t like, he is not very cute, he is mean to your child, he is not as clean as he should be, he is different from the other children. Easy to spot the child who surely has AIDS, right?

These people all meant well.  They all loved their children, and were kind to most.

My lesson: Don’t judge much.  Check the facts.  Ask others to check facts.  Ask others: “How do you know that?”  “What made you think that?” Think of the consequences and ask others not to spread “information” that has not been substantiated.  Think of how you would feel if this were speculation about you, or your child.

We all need better hobbies than that.

Okay, another Montessori insight. 🙂  She noted that young children have, what she called, a “sense of order”.  I think I talk about it a lot.  Perhaps this is because it keeps amusing me to have her (Montessori), proved right over and over in my observations.

Below is a toddler, new at camp, who was not always the most pleased to be there.  She really thought she had better plans for her day than this. Now you can help some children reconcile to their day easier than others. She did not want any of our help!  In fact, when we talked to her, she screamed back.

The first thing she discovered that made her feel better at camp was to sit in a chair.  One chair, the blue one.  She claimed it, and we were fine with that.  We helped her move it, when she asked.

The next thing she discovered that was soothing was stacking the plates. She stacked, and restacked.  She sorted by color.  This kept her quite content for more than an hour,  For several days.

Montessori tells several stories of staying with families, and watching the child get very upset, for “no reason”.  Later, it was determined that someone was carrying their coat, instead of wearing it, or something had been moved in the house.

I have a dear friend whose two year old was distraught when she had her hair permed (in the 80’s).  He kept crying: “Put it back!!”

The first time I experienced this in the classroom, I was an intern, and the other intern and I decided we would take the 3s outside to the picnic table for lunch, since it was finally warm enough.  An experienced teacher, walking through the lunch space, overheard us, shook her head, and muttered : “Sense of order.  They will all cry.”  We were sad for her bad attitude, then watched each child cry at lunch outside.  One even lay his head on the table and sobbed.

This does not mean that we have to give in to every request for the green cup, or the Power Rangers underwear, when they are dirty, or not to move to a big boy bed.  It may mean that we are more understanding with “sense of order” upsets when there are other upsets going on.  It may mean that we keep lots of things orderly and predictable.  It also means, to me, that we can play into this natural sense (and, believe me, it is briefly lived.  By 6, it is practically gone!) and set up routines for children that will become helpful habits of order. 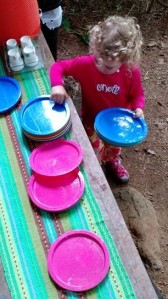